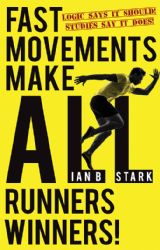 In Fast Movement Make ALL Runners Winners! physiology expert Ian B.  Stark makes some points that might seem counterintuitive and will certainly be seen as controversial by some.

In his book he shows how a lack of sugar can actually thew real cause behind the increase of cases of Type 2 Diabetes.

He points out that it is his desire and aim to start what he describes as "a proper" debate on the causes of the increase in obesity and how to bring it to an end.

In his book he shows how movement can make everyone a winner both physically and financially. And this is the case no matter how good or how bad you might be, he points out.

He draws upon his extensive experiences in sport and nutrition and through his running a lunchtime keep fit club before he took his retirement.

Going against the conventional wisdom of many other studies on the importance of  a healthy lifestyle diet and exercise, Ian takes the somewhat controversial stance that sugars, far from being a total villein in the story are actually a vital part of life and that those who are exercising actually require sugars in their diet to remain healthy.

He believes that what he views as the current obsession with altering our diet in order to control weight gain and avoiding type 2 diabetes is actually a part of the problem and should be secondary to taking exercise.

He believes we should eat to live and not live to eat, that we should look on using calories and not burning calories.

This is an interesting, albeit controversial view of battling the obesity crisis, and will be of interest to professionals or for people who are concerned about their health in general.